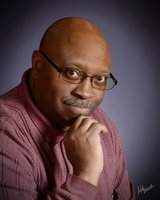 S. Veryl Ellis was born on November 29th 1951 in Philadelphia, Penna. He went home to be with the Lord on January 1, 2021 in Jefferson Hospital in Washington Township. Veryl was born to the late Anna and John Ellis. He attended and graduated from Dobbins Vocational School in 1969. He entered the Post Graduate program for Computer programing the following September. After two years in that program, Veryl was hired the Philadelphia Savings Fund Society or PSFS. He began his career in the Computer business industry starting in March of 1971. He was employed with Sungard until the time of his death. In 1971 Veryl joined the 11th Tactical Air Support group of the Penna. Air National Guard. He Served for 22 yrs. Retiring in 1993. During his service with PA-ANG he maintained his employment with PSFS. While at PSFS he met Valerie C. Durham and they were married on July 12, 1980. They were blessed to have shared 40 yrs. of marital bliss. Veryl’s special sense of humor brought a smile and a thought to many. Veryl loved to serve the Lord in various ways— In song and encouragement to others. Veryl was dedicated in leading worship services that he enjoyed. -Veryl launched out and took flying lessons which was a longtime dream. – {a Sci-Fi note}—"You can’t take the Sky from me” Veryl leaves to cherish his memory a devoted wife Valerie Cecile Ellis, Loving daughter Samia Charmaine Duke, son in law Charles Duke, Jr., sister Cheryle Valentine, one brother-in-Law Michael Durham and a host of nephews, nieces, cousins, friends, and members of his church family at Victory Bible in Hammonton, New Jersey.