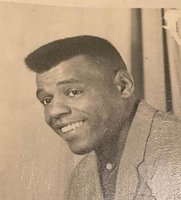 Edward George Jackson Sr passed away peacefully into God's loving and eternal care on Tuesday, February 17, 2021 at his home surrounded by his family. Edward G Jackson was born to Henry Jackson and Clara Moore on April 26, 1931 and was raised by Henry and Henrietta Jackson in Philadelphia. PA He was a graduate of Benjamin Franklin High School in Philadelphia, PA. At the age of 17, he joined the United States Army where he achieved the rank of Sergeant 1st Class and fought in the Korean War. After his seven years of service in the Army, Edward re-enlisted in the United States Navy where he was a flight engineer during the Vietnam War and was honored as Sailor of the Year in 1969. He retired after 20 years of service in the Navy in 1971. He moved his family to Willingboro, NJ and gained employment at the Rohm and Haas Chemical Plant in the Tacony Section of Philadelphia where he retired as a Supervisor. Eddie (Jack) is proceeded in death by his father Henry Jackson, Mother Clara Moore, Stepmother Henrietta Jackson, brothers Ivory, Sonny, Willie, Arthur, Kevin, sister Clara, wife Maria Jackson, sons Henry Kegler and Francesco Siano, and daughter Patrizia. He leaves behind, daughters Ilona Kegler, Anna Siano, Maria Cristina Jackson and son Edward George Jackson, Jr., grandchildren, Bryan and Tyrique Siano, Jessica and Annika Deybser, Nina, Chase and Madison Jackson, great grandchildren Louis, Paolo, Romeo and Elise Deybser as well as many cousins, nieces, nephews and in-laws.