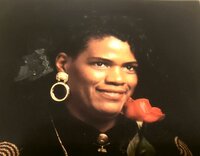 Laverne Edwards Obituary August 11,1949 September 7, 2021 I Shall Wear a Crown Laverne Edwards (Bonnie) was born on August 11, 1949, at Cooper Hospital in Camden New Jersey. She was delivered to her beloved parents Labon Edwards and Frankie Jane Edwards. Laverne went home to be with Lord on September 7, 2021. Laverne Edwards was educated through the Camden Board of Education school system. She furthered her education at Vocational Technology School and majored in data entry. Laverne pursued her passion as a seamstress; as a result, landed a job as a mattress seamstress in Philadelphia, Pennsylvania. She was always willing to climb the ladder of success and educate herself by seeking innovative jobs. She mastered machinery at Campbell Soup Company. Laverne worked in the healthcare system for several years. Her place of retirement was the Lindenwold, New Jersey school system. Laverne accepted Jesus Christ as Savior and Lord and surrendered her life at a young age. She served the Lord for many years. Laverne was a member of Living Faith Christian Center since June 2000. She was involved in a Women’s Small Group until she was no longer able. Laverne was also dedicated to Women of Faith Ministries for seven years under the leadership of her daughter Prophetess Sophia Reese. She was involved in prayer groups, witnessing teams, food ministry, and participated in yearly events. Laverne Edwards was married to Lawrence Battle for 10 years. It was from that union she gave birth to five beautiful children Sean, Shray, Sophia, Shilo, and Shaleatta Battle. Laverne had a personality as bright as the sun. Her laughter caused others to laugh just because she was laughing. She was a Queen who had a perfect relationship with her five children. She nourished them in love and taught them to be strength to one another. She clothed her children with spirituality, style, and class which allowed them to walk in integrity and character. Laverne was a gentle loving mother, sister, aunt, and friend. She enjoyed life to the fullest. Laverne smile would warm your day. Laverne was loving to everyone she met and was willing to help her family and others. Laverne appreciated spending time with her children, grandchildren, sisters, and friends. She was predeceased by her parents, Labon and Frankie Jane Edwards and grandchildren, Sergio Battle and Flower Battle. Laverne leaves to cherish he memories five children: Sean Battle, Shray Battle, Sophia Reese (Timothy), Shilo Battle, and Shaleatta Battle; grandchildren: Australia Battle, Nigel Battle, Sean Battle Jr., Ashley Battle, Sier Battle, Star Battle, Timothy Reese Jr., Taylor Feliciano, Maggie Battle, Sebastian Battle, Titus Reese, Travis Reese, Shilo Battle Jr., Jada Battle, Aiyanna Battle and Shyla Battle; one beautiful great grandchild, Jessiana Robles; sisters: Carol Benson Benson (Clarence), Queenie Bradshaw, Dorothy Thpolphalus (Rocky), and Grace Roundtree (Michael); brothers: Charles Edwards, Joseph Edwards, and John Edwards and a host of other relatives and friends. Laverne sayings for her children: She imparted words of wisdom: “A hard head gets a soft behind “ “You make your bed you lay in it “ “Stick together because one day you will need each other “ “Don’t wear your welcome out “