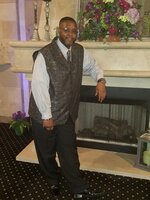 On Saturday, March 19, 2022, God called Timothy Jermaine Thomas to his eternal home. Tim was born on August 7, 1973, to William Glover and the late Alice Thomas in Philadelphia, PA. He was the oldest of 3 children. Tim grew up in Philadelphia where he was educated in the public school system. He began working at a young age in the restaurant industry. Later, he also worked in hotels in the hospitality department. In 1997, Tim and Kilynn Johnson were blessed with a son, Nafis. Tim and Kilynn remained friends while co-parenting. Tim and Nafis spent a lot of time together watching football, listening to music and writing rhymes for “hip hop”. In 2001, Tim met Crystal Foxworth. They married in October 2003 and were truly a happy couple. Tim and Crystal spent all their time together until his passing. Tim was an avid football fan. Everyone knew how crazy he was about his New England Patriots. Tim also liked to cook, and he loved watching movies. He had a special kind of humor and a laugh that would fill the room. We will surely miss his outgoing personality! Tim was preceded in death by his mother, Alice Thomas and his sister, Dee Thomas. Tim leaves to cherish his memory: his wife, Crystal Thomas; his son, Nafis Tyree Johnson; his father, William Glover; his brother, Maurice Thomas; his father-in-law, Vincent Foxworth; his mother-in-law, Cynthia Foxworth; his brother-in-law, Tony Buckman; his sister-in-law, Silver Buckman; his nephew, Vincent Collin Buckman; his niece, Sierra Buckman; and a host of uncles, aunts, cousins, and friends.