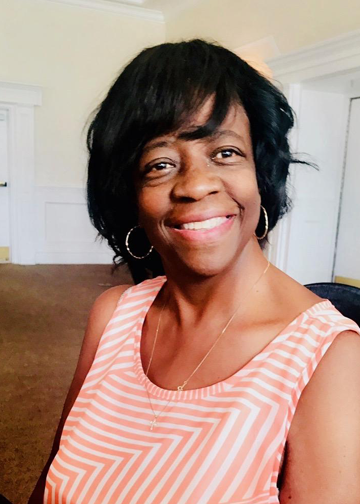 Darlene Brewer was born on October 27, 1956 in Louisa, VA to   Alice Elaine Gatewood and the late Robert Henry Gatewood. She departed this life on Sunday, August 11, 2019 at Our Lady of Lourdes Hospital in Camden with her loving children and family by her side. Darlene will be affectionately remembered for her big bright eyes, loving smile and infectious laugh. She always described herself as passionate, often writing poems, most notably the “1449 Princess Ave. Porch Sitters”. What she felt strongly about she always made sure to let you know. Her strength was unparalleled, managing to deal with many years of sickness yet taking care and giving her all to her husband and children.

At a young age Darlene joined the Little Rock Baptist Church and served on the Young Adult Choir. She also won the Queen of Little Rock Competition. In 1975, Darlene graduated from Camden High School and earned a scholarship to attend Howard University.

On February 19, 1983 she married the love of her life Carlos. From their union was born her son Carlos F. Brewer, Jr. who she called “Juney” and her devoted daughter Brittney that she called “Nan”.

Together we have lived, loved and laughed so much. Now God has silenced you with his final touch. We must let you go as hard as it will be, but like you one day we’ll all be free.

To send flowers to the family or plant a tree in memory of Darlene Brewer, please visit Tribute Store
Saturday
17
August