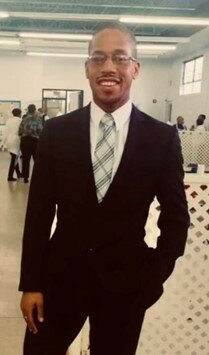 Please share a memory of Dwayne to include in a keepsake book for family and friends.
View Tribute Book
Reflection of Life Dwayne Leon Cotten was born on June 5, 1986, in Wayne, New Jersey and became the son of John and Earla Cotten on July 15, 1986 and was the first of his parents three children. He graduated from Pemberton High School in 2004 and went on to further his education in Music Arts at Trenton State University. He later became certified as a Paralegal and a Notary Public and resided in Philadelphia, Pennsylvania. Dwayne loved music and participated in various school and church activities, such as his high school band, church choir and musical theater. He also played musical instruments that included the saxophone and clarinet, together with dabbling in the composition of music and lyrics. Growing up he loved playing youth baseball and basketball, and as an adult Dwayne really enjoyed playing tennis with his friends and according to him, “was really good at it” -- tennis became one of his true passions. His career path included project management in many positions to include construction management, accounting and his most loved job was working in the hospitality industry. Dwayne was very much a people person; he was that bright light that illuminated in the lives of his family and friends. His warm smile, his gentle mannerism, his caring eyes, his ability to articulate so well whether orally or in writing caused many to either find a dictionary or google the words that he spoke. He always said that he would be the next Anderson Cooper on CNN. Dwayne was a man of many words and would not hesitate to ‘check you’ if needed – he would have the last word for sure. Dwayne was very loving, compassionate, and kind to any and everyone who needed his support – many times his kindness was taken for granted but still willingly gave of himself and from his heart. He especially loved his family – they meant the world to him and always wanted to be included in everything that was family-oriented. Everyone knew that Dwayne loved to sing and dance to the point where you could be around him and he would just start bellowing out one of his favorite songs especially if it was Michelle Williams of Destiny’s Child. His dancing skills were impeccable and was a member of a couple of dance companies in Philadelphia. He loved gospel music and was a member of the Voices of Faith choir at St. Mark Baptist Church of which he was a member. He was also one of the worship leaders at The God Environment Church in Philadelphia. Dwayne loved to travel, especially to the island of his mother’s birth, Nevis. He even sometimes spoke the Caribbean dialect so well just as if he was born there, for example, if you appeared despondent or even a little agitated with him, he would jokingly blurt out, “why you so vex?”-- meaning why are you mad or sad. Dwayne loved God and would quite often engage in conversations about his spirituality with family and friends, emphasizing the fact that God made him who he is and knew for sure that He loved him. Dwayne sadly and unexpectedly leaves behind to cherish his memory his parents John and Earla Cotten, birth mother Seprina-Renee Thomas, brother John Cameron “JC” Cotten, brother/cousin Tyshon Milton, sisters Jonelle Cotten (deceased), Ashley and Alicia Thomas. Also left to mourn is his niece Ava Cotten – the light of his life, his Auntie Alice/Godmother whom he shared a very special bond, Aunt/Godmother Terre Cotten, other aunts, uncles, cousins (especially Cory and Larry, Jr.), Verlyn Sheridan whom he always called Auntie, a host of friends, colleagues and his loving pets Zoe and Zena. You will be missed by all of us, blessed to have known you. Rest In Peace. “May the winds of heaven blow softly and whisper in your ear, how much we love and miss you and with that you were here.” Unknown
To send flowers to the family or plant a tree in memory of Dwayne Cotten, please visit Tribute Store
Saturday
11
June