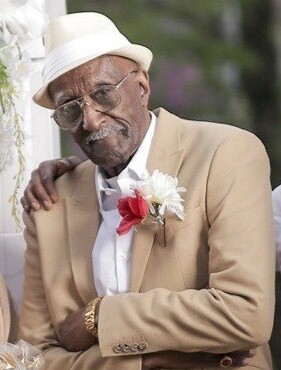 Please share a memory of Melvin to include in a keepsake book for family and friends.
View Tribute Book
“John answered, saying unto them all, I indeed baptize you with water; but one mightier than I cometh, the latchet of whose shoes I am not worthy to unloose: he shall baptize you with the Holy Ghost and with fire” Luke 3:16 kjv Melvin Vurnul Wright, affectionately known as “Mr. Mel” was born on July 7, 1935, to Levi and Mattie Young Wright in Craven County, NC. Melvin was predeceased by his parents, his two brothers (Lee Thomas Wright and Arthur Wright), and his three sisters (Mildred W. Guion, Martha Fitzgerald and Cora Wright). As a young man, Mel ventured out and settled in the great city of Philadelphia. He wore many hats, figuratively and literally. He was a drummer, a trucker, an electrician, a skillful carpenter and the list goes on. His memorable look, trademarked by his baseball cap complemented with a set of aviator glasses, matched his calm laid-back demeanor. As a talented drummer, he had the opportunity to play in venues throughout the Northeast. He also supervised a laundry factory in Philadelphia, which was a staple in the community. Later, he would work as a contractor where he built houses and remodeled homes with his close friend and business partner, Detroit Booker. Although far from his hometown, he never forgot his family or his roots and visited regularly. He especially loved his nieces and nephews as much as they loved him. He was a family man that ensured he took care of his loved ones. His joyful smile brought out the best in everyone. He would go on to have four children with the love of his life and wife, Melaney Enos-Wright. They raised their children in Camden, New Jersey. Mel pursued many interests throughout his life and enjoyed a host of activities. Among others, he was a savvy bowler and fisherman. Melvin aka Big Bro/Mel leaves behind to cherish his memory Wife Melaney Mahealani Enos-Wright. Son Kamuwela, Daughter Mahealani, Son Eli (Laura) and Daughter Malia (Tymir). Nine grandchildren Kulena, Kylie, Kia’i, Keone, Lëholani, Miliana, Twins (Kauila and Kahekili), Makana, and 1 more grandchild is on the way. He is also survived by his nephews, William Guion (Lillian), Leonard (Leman) Wright, Graylin, Guion, Ronnie (Shelia) and Vidal Wright. Nieces, Linda G.Kearney, Deborah G. Madden, Mary G. Williams, Jerelyn G. Foskey, Shirley Fisher, Renee Wright, Denise Wright, Raquel Wright, Kimberly Wright, Debra Wright, Katrina Wright and Bianca Alston. A great friend Pastor Emilio, and countless friends on his journey of life.
To send flowers to the family or plant a tree in memory of Melvin Wright, please visit Tribute Store
Friday
24
June

Share Your Memory of
Melvin
Upload Your Memory View All Memories
Be the first to upload a memory!
Share A Memory
Send Flowers
Plant a Tree