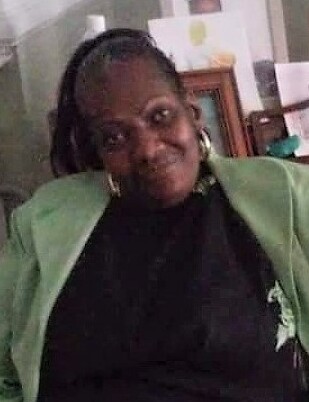 Please share a memory of Dorothea to include in a keepsake book for family and friends.
View Tribute Book
Her Story A virtuous woman, who can find? Her value is more than rubies…Proverbs 31:10 Dorothea Watson Peoples, affectionately known as, “Dot”, was born on November 16, 1960, in Camden, NJ. She was the youngest of seven children born to the late Effie Louise Hailey and George Washington Watson, Sr. Educated in the Camden school system, she graduated from Camden County Vocational Technical School (Sicklerville campus) in June 1980. She would go on to work for many years at Cooper Hospital and Cooper River Convalescent Center. Dot, as her name indicates, was a gift from God and as her actions showed, constantly gave to family and friends. She truly loved the Lord and loved listening to and singing gospel songs. As a youth, Dot was raised in church and attended St. James Apostolic Temple. There she led many songs with the Watsonettes. As a member of Friendship Baptist Church, Dot was elevated to role of Deaconess and continued singing on the Mixed Chorus and Mass Choir. Her favorite song, “Surely, God is Able”. After meeting and having a brief courtship, in 2003 Dot married Deacon Eugene (Gene) Peoples (deceased). Dot was known to love cooking and was good too! Her signature dishes she is known for making were macaroni and cheese and sweet potato pies. She loved her children and doted on her grandchildren, but to escape their presence, Dot would run away to her sister Evelyn’s and brother-in-law, Larry’s house. Just like when they were young, Dot would always tag along with Evelyn. One thing most memorable about Dot is her way of making comments about people, she had a unique, witty sense of humor. She missed her calling as a comedian because she was always saying something to make you laugh. In the eve of the day on January 15, 2023, God quietly called Dot to transition to her heavenly home. Those who predeceased Dot are, her parents, Effie and George, Sr. Her brothers, Johnny, Freddie and Calvin Watson. Her aunt, Fannie Mitchell and uncles, Ray, Ernest, Walt, Lucious and Robert Hailey. Dot leaves a legacy of love and memories through her 5 children, Aaron, Sr. (Syrita), Karima, Myron (Kathy), Latoya (Vincent), and Ashley. Her 12 grandchildren, Tyanla, Domian, Aaron, Jr., Myles, Ania, Nevaeh, Cameron, Jaheem, Kahari, Harlem, Israel, and Ahmad. Her sisters, Margaret and Evelyn. Her brother, George, Jr. and brother-in-Law, Larry Johnson. Her aunt, Mildred Allen and uncle Alexander Hailey. Close friends Edwina Pennington and Harriett (Peet) Barnes. Many nieces, nephews, cousins, and friends. Lovingly submitted by the family.
To send flowers to the family or plant a tree in memory of Dorothea Peoples, please visit Tribute Store
Saturday
28
January